Many professionals will likely be aware of the anti-RICE (Rest, Ice, Compression, Elevation) movement that has been gaining publicity for the past perhaps 15-20 years. But even so, the most widely used method in human medicine/sports medicine for the treatment of acute soft tissue injury is still RICE. In the equestrian world, cold or cryotherapy is still widely used and there does not appear to be as much in the way of campaigning against its use as there is in human medicine. So is the difference because we know something that those dealing exclusively with human patients don’t know or is it just that we don’t yet have the studies to show it’s at best ineffective or at worst harmful and actually slowing recovery from injury?

Perhaps the first thing to examine is the way in which cryotherapy could be used with horses. The first and most obvious is in acute injury. Here the use of cold has the effect of reducing the inflammatory response and reducing pain. There have been suggestions that reducing inflammation in acute injury is detrimental as the inflammatory response is part of the repair process. The jury still seems to be out on this but this is certainly a core argument against the RICE protocol: that is inflammation is good and should not be controlled. In this context, these two quotes are pertinent.

“Acute inflammation is an important part of the healing process after musculoskeletal injury, but unless it is controlled early, it can significantly hamper rehabilitation.” (Baumert, 1995).

“The objective of RICE is to stop the injury-induced bleeding into the muscle tissue and thereby minimise the extent of the injury.” Jarvinen et al. (2007).

So the key aspects of using ice or RICE are about limiting but not abolishing inflammation and reducing the extent of the effect of an injury into surrounding (uninjured) tissue.

The second and equally important aspect of cryotherapy in acute injury is the analgesic benefit. In cases of moderate to severe injury it may be some time before a vet can see a horse and administer anti-inflammatory medication and these still take some time to produce a significant effect, so in that period cryotherapy can provide a degree of analgesia.

I believe the ideal is actually likely somewhere in between and I think this may be where the arguments have become polarised and extreme. From my perspective it’s not an argument about whether to use cryotherapy or NOT, it should be a discussion about how much cryotherapy is useful and in what situations. 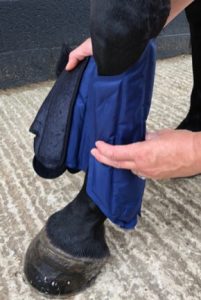 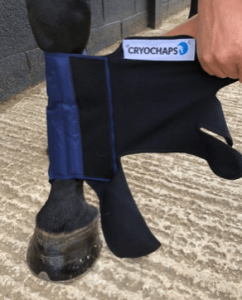 The other use of cryotherapy is prophylactically in relation to regular training and competition when there is no obvious injury. In the horse this is particularly relevant to the feet, the fetlock and knee joints and the flexor tendons. Training or competing on hard ground can lead to soreness in the feet and joints which can be treated with cryotherapy following exercise. Similarly, older horses with arthritic changes in their joints can be made more comfortable after exercise with acute cryotherapy.  With respect to tendons and ligaments, particularly those of the lower limbs, we are aware that these are a very common site of injury and that the injuries are in the main the result of accumulation of low-grade damage over months and years of use. The temperatures within these tendons are also some of the highest in the body and this enhances any inflammatory effect. Is this natural? I would argue the domesticated horse’s tendons are not ideally designed to cope with the temperatures that they reach during training and competition. The temperature at the end of exercise is a combination of intensity and duration. In the wild horses do not canter and gallop for the same durations as we ask in training and competing and so it is likely that their tendons do not reach extremely high temperatures which lead to inflammation and degradation of the tendon matrix. For this reason, I believe that cooling after exercise is an important tool for tendon longevity.

To return to the controversy over the use of RICE in human medicine/sport. There is evidence from published peer-reviewed studies that reducing inflammation is beneficial in many circumstances. It’s not that all evidence supports not adopting the use of cold. In addition, this is not about blocking inflammation entirely, which is unachievable, but about a moderated inflammatory response as a degree of inflammation is clearly part of the repair process. Use of cryotherapy in the horse has to also be considered in the light of a number of factors:

(1) We cannot actually adopt RICE – we can only partially rest (non-weight bearing is not an option), we can ice, we can compress, but we cannot elevate

(2) Ice is used on the lower limbs of horses not only for tendon and ligament but also for joint and for the feet (e.g. concussive laminitis, reducing the severity of laminitis from other cause, etc)

(3) Tendon and ligament injuries are the most common lower limb injury in mature horses (e.g. Murray et al. 2006), particularly SDFT tendonitis. Consensus is now that the majority of these injuries are as a result of accumulated (chronic) low-level damage/repeated insults as opposed to isolated catastrophic events. Wild horses spend the majority of time walking, whilst domesticated horses experience significantly greater periods of trot, canter and gallop i.e. an exercise regimen they did not evolve for

So if you are going to use cryotherapy either for acute injury or on the limbs after training or competition, which methods are most effective and how long should they be used for? I recently compared a variety of commonly used limb cooling methods including hosing, ice and water, ice boots, clay and evaporative/water cooling boots (Marlin, 2019). Standing in ice and water was the most effective, whilst cold hosing with water at 15°C and the commercial ice boots that were tested produced similar and acceptable results. Methods to be avoided as they are ineffective include evaporative water-cooling boots, clay (covered or uncovered) and alcohol-based gels.

Human research indicates that after exercise (not injury) between 10-15 minutes with a temperature under 15°C is recommended; however, for horses’ legs it’s common to see 30 minutes recommended. The horse’s lower legs have no subcutaneous fat, no muscle and the tendons themselves have a poor blood supply. So the impact of ice and compression should be accentuated. A possible comparison in people is the Achilles tendon which is similar in structure to the horse’s flexor tendons and has also little subcutaneous fat, is near the surface and also has a poor blood supply.

Studies with Cryo/Cuff, an ice and compression wrap, on the Achilles tendon have shown that repeated periods of 10 minutes of ice and compression application are most effective. This is suggested to be because the most marked effects on the microcirculation are evident within the first 10 minutes after application.  There is also evidence from in vitro studies which demonstrate no damage to the tendon cells maintained at 10°C for 1 hour. Therefore, why not ice for longer than 10-15 minutes?

Keeping tissues too cold for too long has the potential to cause superficial tissue damage and nerve palsy after only 20 minutes. Internal temperatures of under 15°C can cause inflammation and oedema and increase lymphatic permeability, so reversing the initial beneficial effects of cold that cause vasoconstriction (limiting bleeding into uninjured tissue) and anti-inflammatory effects. Ice and compression reduce blood flow more than just ice alone: by reducing blood flow the inflow of heat from the rest of the body is reduced. Ice and compression do produce significantly colder internal tissue temperatures than ice alone. Colder temperatures decrease tissue metabolism which in turn slows the inflammatory response; a 10°C drop in temperature produces a 50% decrease in metabolic rate.

Reducing blood flow also reduces tissue oxygenation. This has been proved in studies with the Aircast Cryo/Cuff, that uses both ice and compression. Oxygen is a double-edged sword as oxygen leads to free radicals which play an important role in inflammation but it is also central to the healing process. Studies with the Cryo/Cuff in the Achilles tendon injury demonstrated better tissue oxygenation after removal with an application time of 10mins compared with baseline, suggesting an increase in blood flow after removal.

Two studies in live horses (Kaneps, 2000; Petrov et al. 2003) investigated the temperatures of skin and the SDFT after 30 and 60 minutes of ice water immersion. The SDFT temperatures dropped very quickly to between 10 and 15 °C within the first 10 minutes and then started to plateau. The implication is that blood flow to the limb may increase after 10 minutes to prevent a further decrease in SDFT temperature below ~10-15°C.

The debate over cryotherapy is likely to continue and there are still gaps in our knowledge. Some of the human research is not directly comparable to horses. For example, we know that horses can greatly reduce blood flow to the extremities without tissue damage as would occur in people (cf frostbite). We also have to recognise that equine tendons reach high temperatures as a result of exercise and that we know these are damaging. On balance I believe that cryotherapy is a beneficial and an important tool in the physio, owner, rider and vets’ armoury but there is still an opportunity for further research to determine whether the current cooling protocols we use in horses after exercise and injury are optimal.

What is anaemia in horses?