Previously we showed how a dark rug in the sun heats up even when the air is cold. Combined with the insulation of the rug itself, this slows down heat loss from the horse because the rate at which heat is lost is dependent on both the thickness/insulation of the rug AND the difference in temperature between the horse and the outside of the rug.

In the previous example we didn’t use a horse or any heat. Now we are introducing a heat pad. Not quite a horse yet, but soon, I promise. The advantage of the particular heat pad I’m using is that it doesn’t try to control its temperature – it just generates a constant amount of heat. The difference is that the horse will respond to higher skin temperature – this is what we call thermoregulation.

But for today, I have taken the same 50g rug as before and measured the air, under-rug and rug surface temperatures with a heat pad under the rug inside a brick building (no sun at all), in full shade and in the sun. The inside under-rug temperature was adjusted to ~30°C as this would approximate the skin temperature of a horse at around 5-15°C.

So we can see that inside the under-rug temperature is close to 30°C and the on-rug (outside of rug) temperature is just over 20°C, due to the insulation in the rug. This is what it is supposed to do – insulate – slow down the heat loss from the ‘horse’ – in this case, the heat pad. When we go outside, even in the shade, there is enough infra-red radiation from the sun to warm up the rug surface and this has the effect of slowing down heat loss so the under-rug temperature is higher. And when we put it in the sun (it was partly cloudy so quite weak sun today) we see a further increase.

So this is a heat pad and not a horse. If this was a horse then the horse would try to get rid of more heat by increasing blood flow to the skin. Remember not all the horse is covered so there is the possibility of losing more heat from the legs, belly, head and neck.

TAKE HOME MESSAGE – On sunny days even a light rug can be quite effective at reducing heat loss and this is also affected by how much sun there is. Other factors can also increase heat loss. For example, if it’s wet and/or windy this would lower the rug surface temperature and increase heat loss from the horse. 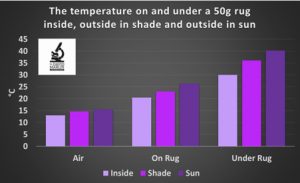 COMING UP: Next we will look at what happens when we keep adding a number of rugs to a horse.

Read the first and second part of Dr David Marlin’s Over-rugging research from earlier in the week by clicking here.

Then read what happened when we added 7 rugs to a horse: Click here

Is it time to start rugging our horses?