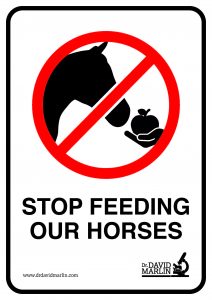 Dr David Marlin has thrown his support behind the national Stop Feeding Our Horses campaign, designed to educate the public on the dangers of feeding equines without owners’ permission.  The initiative, set up by Hannah Johnstone and actively promoted by former groom Natalie Munir, was set up in the wake of a large number of incidents which resulted in horses and ponies suffering illness, injury and death after unauthorised feeding by members of the general public.

With the COVID-19 pandemic, there has been a dramatic increase in the number of people walking in the countryside. Comments on social media and some news stories on websites and in magazines have highlighted cases of increased interference with horses in fields, including entering fields, chasing horses, leaving gates open, damaging fencing and gates, feeding horses and allowing dogs or children to chase horses. In 2020, the BHS ran a survey in conjunction with Bristol Vet School.

Dr David Marlin ran an online poll with four closed questions in the middle of February 2021. The poll was launched on the @DrDavidMarlin Facebook page. The team specifically avoided promoting the poll in any of the Facebook groups that are focused on this issue to try to reduce the risk of responses from those who had experienced interference. However, you still cannot discount that those who have experienced interference may have been more motivated to complete the poll. The poll was live from 18 February 2021 for 7 days. A total of 2,745 complete responses were received. Only responses from the UK were accepted.

To read the full set of results including graphs please click here and head to our research section.

The Dr David Marlin team are working with the Stop Feeding Our Horses Facebook Group and their associated Instagram page to help raise awareness about the problem and educate the public about the dangers and genuine threat to life for many horses.

The Dr David Marlin Team have produced this poster and encourage horse owners to download, print and attach it securely to stables, gates and field perimeters to help warn and try to educate the public about the dangers of feeding horses. 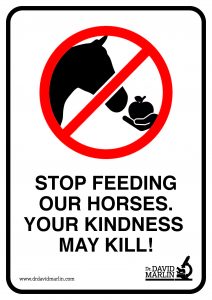 Helen is Head of Operations. Making sure the website and membership runs smoothly, whilst developing new ideas and initiatives.