Few calmers have undergone any controlled investigation and many scientists, nutritionists, vets and horse owners believe any apparent effect may be down to the placebo effect.

Hypothesis/Objective
The present investigation was undertaken to determine the opinion of horse owners on the efficacy of different calmers.

We hypothesised that horse owners would rate the calmer they were currently using higher than calmers they had used previously.

Methods
An online questionnaire was distributed through social media. This was not associated with any specific company or calmer. The survey consisted of 12 questions with a freeform box for comments at the end. The survey was active for 1 month and responses were limited to 1 per IP address.

For each previous calmer used or current calmer being used, owners were asked to rate it on a 5 point Likert-type scale: Very effective; Moderately effective; Slightly effective; No obvious effect; Made condition worse.

Results
1665 valid responses were received. Seventy-seven per cent of respondents had previously used a calmer and 53% said they were currently using a calmer. Over 70 different calmers were named. Only calmers that received more than 20 ratings were included in further analysis. 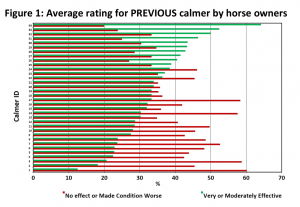 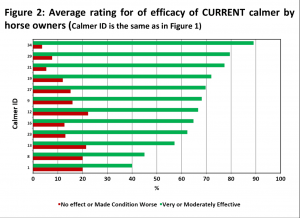 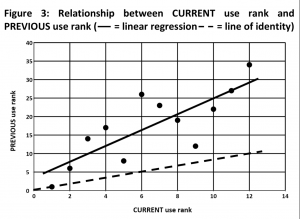 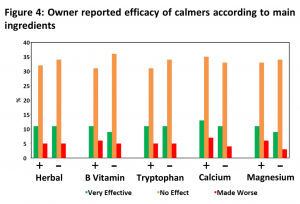 Conclusion
Horse owners rated the calmer they were currently using more highly than calmers they have previously used.

There was a good correlation between ratings of previous and currently used calmers.

The low rating and similarity in the rating of calmers with different active ingredients suggest a strong placebo effect may be present.