This has now been played – the replay will go live in the next few days.

You do not want to miss this exclusive webinar with Olympic Farrier Ben Benson!

Tokyo Farriers – A farrier’s guide to the Olympics

Ben will be discussing his experiences in Tokyo (possibly Rio and London also), explaining how the farriers are an integral part of the team and what the man with the hammer is tasked with

Ben is a true legend, he’s depth of experience and knowledge is inspiring, and he has been the lead farrier at the last THREE Olympics.

Upon qualifying Bens, interest in shoeing sports horses increased significantly having seen how shoeing and its effect could influence the horses gait, soundness, and range of movement. This led Ben to gravitate his business and shoeing practice towards both remedial Farriery and the sports and performance horses that he is known for shoeing. He now has a successful business in North Oxfordshire that employs both qualified Farriers and has apprentices with a client list from hairy ponies to 3* and 4* eventers, Grand Prix dressage horses and Global Champions tour showjumpers. He works with many varied vet practices and alongside all other team associated paraprofessionals. In 2016 he gained his Associate of the Worshipful Company of Farriers (AWCF)

Ben was one of the lead farriers at the London 2012 Olympic and Paralympic Games and Rio 2018 and recently was the head Farrier for the Tokyo 2020 Olympic Games.

Ben is the 77th Master Farrier in the UK as awarded by the Worshipful Company of Farriers in 2017 and also one of only 120 Approved Training Farriers in the UK. He carries out farriery lectures to vets, universities and to the public. He has been involved as a consultant with the World Class Programme for some years and currently works with the Podium Potential Squads

Currently, Ben sits as Vice President on the Executive committee for the British Farriers and Blacksmiths Association (BFBA) and also sit on the BFBA representative on the British Horse Society’s Equine Welfare Committee.

In this exclusive webinar, Ben will tell us a little about this illustrious career, what it takes to reach the top and shoe horses for performance, and that doesn’t just include those at Grand Prix. Ben will delve into a few secrets about what a performance horse’s feet need and offer some tips for you to understand what it is your farrier is doing down there. 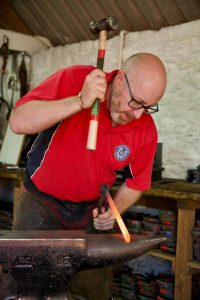 Helen is Head of Operations. Making sure the website and membership runs smoothly, whilst developing new ideas and initiatives.

Webinar – A farrier’s guide to the Olympics – Ben Benson