The results from the October 2021 Calmer survey are in!

An incentivised Survey Monkey survey consisting of 21 closed and 1 open question was distributed on social media. Of the 21 closed questions, 6 had the possibility to enter something not covered by the structured question options (i.e. “other”).

A total of 2655 responses were obtained with a completion rate of 86% and an average completion time of 3m38s. Respondents could rate a maximum of 3 different products: one that they were currently using and two that they had previously used. The survey was live between 12-10-2021 and 29-10-2021. The survey was launched on the DrDavidMarlin Facebook page and shared with multiple other unconnected equine Facebook groups.

The survey was open to anyone in any country. Responses were encouraged from those who used or did not use calmers. Responses were anonymous but users could choose to be entered into the draw to win one of three prizes. 1960 respondents chose to enter the draw.

Checks were undertaken to ensure there was no influence through multiple entries to inflate ratings for specific products. The data were exported from Survey Monkey and imported into Excel. Analysis was undertaken using Excel’s Pivot Table functions.

For scoring of effectiveness, the following numerical scores were assigned:

The scores for each product were obtained by taking the sum of all scores and dividing by the number of ratings to obtain the average score which was then converted to a %.

Riders who had never used a calmer cited dealing with behavioural problems through training as the most common reason for not using them (65%), followed by a belief that they don’t work (37%), whilst 29% said they had never had a horse that required a calmer. 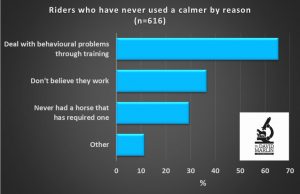 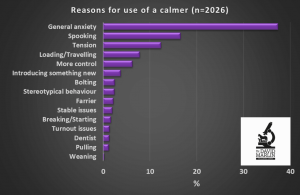 As we have observed in similar surveys in the past and as would reasonably be expected, riders rate products they are currently using much higher than those they have used in the past. Almost 3x more people rated their current calmer as Extremely Effective compared with a calmer they had previously used. And whilst 8% had recorded that a calmer they had previously used had made their horse worse, no-one currently using a calmer had observed this. The scores for calmers currently being used all received a rating between 72% and 91%.

It was good to find that the frequency of reported side effects was generally low and not serious. The most common side-effect reported was, paradoxically, Excitement (4.9% of previous calmers; 0.4% of current calmers) followed by Feed Refusal (3.7% and 3.8%, respectively) and Sedation (2.3 and 2.4%, respectively).

For previously used calmers, only calmers with 10 or more ratings are included in the final results. Scores closer to 100% indicate extremely effective in the majority of horses, whilst scores below 40% indicate only slightly effective and scores below 20% suggest no discernible effect. The fact the highest rating is for Domosedan, a Prescription Only Medicine (POM) which can only be obtained from a veterinary surgeon (UK), is extremely encouraging. This is also supported by high ratings for Acepromazine which is also a POM (ACP, Sedalin Gel, Atrovent, PromAce, Notensil) and which is also a Prohibited Substance classified as a Controlled Medication.

Finally, Valerian is also a Prohibited Substance classified as a Controlled Medication under FEI rules and United States Equestrian Federation (USEF) rules, but which is not classed as veterinary medicine and is therefore easily obtained but illegal for competition use. Interestingly, whilst valerian is banned for competition, there are few if any good studies on its efficacy in horses. Thus, the top three rated “calmers” are all Prohibited Substances and two are only obtainable through a vet in the majority of countries.

The highest rating for a competition legal calmer was for ProKalm (Science Supplements), which was also the highest-rated equine calmer in a previous survey in 2016 in a slightly smaller survey of 1689 participants. Click here to link to that survey.

Only 6 products previously used by owners scored over 50%, suggesting they were considered by owners to be at least moderately effective. 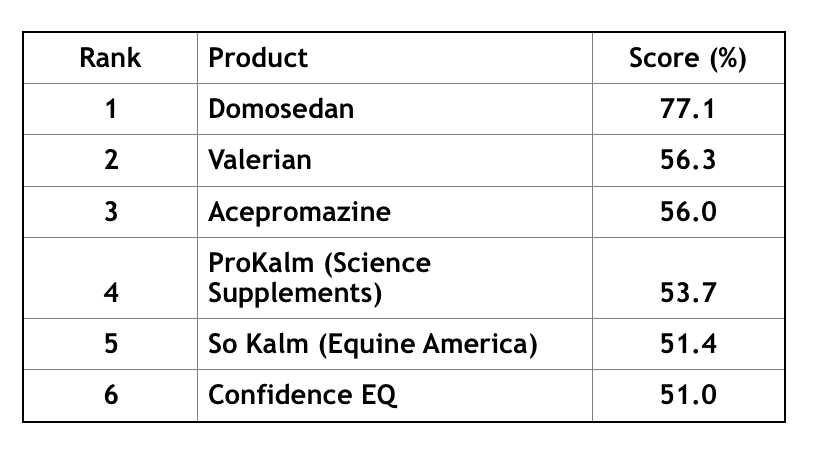 The full results will now be written up as a scientific paper and submitted for publication in a peer-reviewed journal.

Owner reported perception of the efficacy of equine calmers

Podcast – Stress in horses and riders, by Dr David Marlin