Every year there are apparently conflicting reports from horse owners over the extent to which their horses are affected by fireworks with some owners stating it’s not an issue and others saying their horses are badly affected. Despite this, there is little structured information available on how badly horses are affected, the steps which owners take to minimise the effect of fireworks or the number of horses that have been injured.

The survey consisted of three closed questions and was anonymous. The second question also had an option for free-form comments. It was shared on the Facebook group @DrDavidMarlin and on other equestrian themed UK pages and groups.

A total of 2837 responses were received at the time this data was collated. 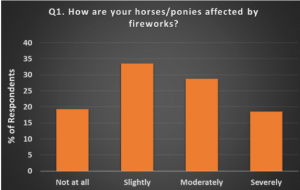 Around 20% of owners considered that their horses were not at all affected. However, this may be
due to lack of exposure to fireworks but this was not explored in this survey.

Almost 1 in 5 were reported to be severely affected.

Q2. What have you tried to help your horse/s or ponies and how effective did you find it?

None of the common approaches listed were considered particularly effective. More people had
tried bringing horses in than turning out. Other approaches that were mentioned included
turning/leaving lights on in stables/yard, distraction, staying with the horses, providing extra
feed/hay. Only a few people mentioned using desensitisation i.e. using a sound recording of
explosions and playing this at a low volume and gradually increasing the volume over time. 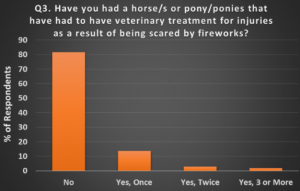 Around 1 in 5 owners had a horse or pony that had required veterinary treatment as a result of fireworks.

There is an opportunity here to increase awareness amongst horse owners of the possibility of using desensitisation to firework noise as a way to reduce stress caused during periods when fireworks are regularly used.

A guide to sound therapy for pets is available free on the Dog’s Trust website. Whilst its aimed at dogs there is no reason why the same approach could not be used with horses.