As you may have realised my diaries encompass part of the previous day and then part of today, partly due to workload and partly due to the time difference so I hope it isn’t confusing!

Yesterday saw the Dressage Grand Prix Team Competition. We were lucky that the weather system moved away North from its predicted path near to Tokyo which means we had a warm day and no further rain. More importantly, it took the lightning with it.  Earlier in the morning, we had a predicted risk of 60% at the venue so I was put on lightning watch in the judges tower with the technical delegate.  It is amazing that we can now track lightning almost in real time – the delay is around 2-3s.   So my job was to track and predict if and when we could expect lightning at the venue or if there were sudden unexpected strikes in the vicinity.  Ideally, competitors would finish their test, and then there would be horse and people evacuation into the indoor arena.  But there could also be an interruption of a test with a double bell ring if the lightning was sudden and close.  Fortunately, no action was needed as the main lightning activity was several hundred km North-East of Tokyo.

The closest the lightning got to the venue was ~25km around 12pm last night with a few events in Tokyo bay which we saw from the hotel after arriving back from the venue. 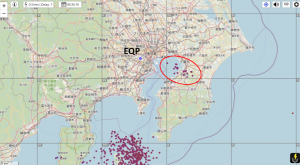 I was based in the judge’s tower which has the advantages of a great view, air-conditioning, and the opportunity to listen in on the comments from top judges, including David Hunt (right). 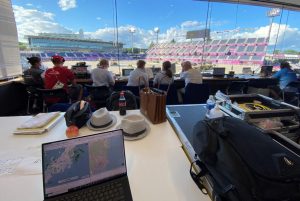 Immediately behind the Judge’s tower is the bit check and cooling area so I was able to nip out often to see the horses going in and coming out of the arena.

Below is Carl Hester and En Vogue. 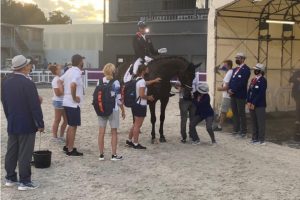 This is also one of the areas where we collect thermal images of the horses and below you can see thermographer Helen Reynolds from the UK who is the technical lead for my team, imaging Charlotte Fry’s Everdale after their test.  The horses are also monitored in the warm-up and final warm-up arenas and any concerns are flagged to stewards and the veterinary commission.  But this has rarely been necessary and the Dressage teams all seem to be exceptionally well prepared. 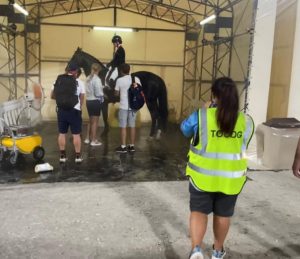 A bronze medal for Team GBR was an incredible achievement, especially given the young horses and a rider with no previous Olympic experience in Charlotte Fry. I have to say observing Charlotte Dujardin in particular, for me she has been an exemplary professional.  And of course, with this team bronze, she becomes the British female Olympic all time medal winner!  Calm, focussed, and always primarily concerned with Rio’s welfare.  I observed her stopping to ask him to be cooled several times during warm-up and they waited in the tent with misting fans before going in to compete.  And on coming out of the arena she requested to have her bit check in the misting tent – only Charlotte and Isabell Werth did this (although Charlotte Fry and Carl went in immediately after their bit check).  I can’t fault the British Team’s management of their horses here.  They must have had a good coach 😉 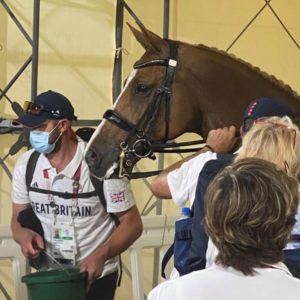 The below picture is a little below the usual standard I would want to post as it’s a little blurred but I think this also tells you about the horse and rider bond here. 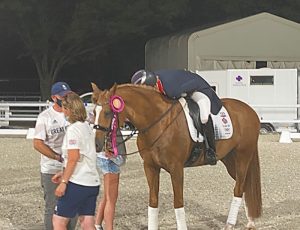 So the German’s won the Gold (again!). In fact, Germany has won EVERY Team Dressage Gold since 1984 with the exception of London 2012.  And even for me who is not a dressage aficionado and who sometimes struggles with the concept of subjective judging of performance, I could notice there was something special that probably deserved the Gold. 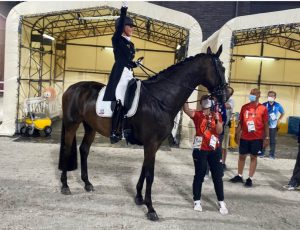 And there were a lot of people to witness this, even if maybe 50% of them were press. 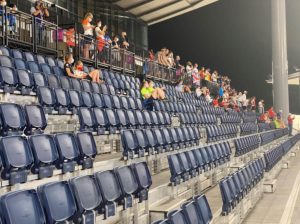 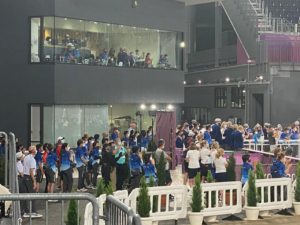 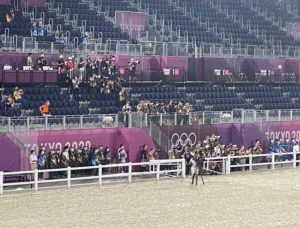 This morning we have the second Horse Inspection for the Dressage Individual Grand Prix Freestyle this evening.  For those that aren’t aware, it is treated as a separate competition to the team and hence a separate inspection. 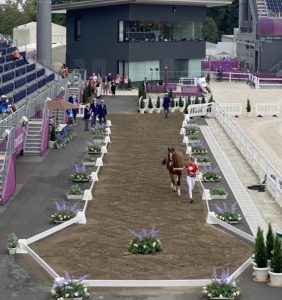 I’ve now been here 8 days and worn all of my official Tokyo 2020 uniform with the exception of the bum-bag and the socks.  Maybe ebay?  Just kidding.  Maybe a DrDavidMarlin.com Members competition giveaway! 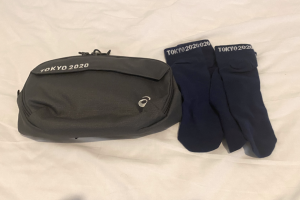 So Dressage Grand Prix Freestyle starts tonight 5:30pm Tokyo time, 9:30am UK time.  As soon as I have the order of go I’ll try and remember to post it. But your options for viewing are: 09:30–13:25: Dressage Freestyle individual final (Eurosport Player, discovery+ and BBC 2, BBC iPlayer and BBC Red Button).

You can also watch it on Tele Sport, A Russian streaming channel. Some people seem to be able to access this but others have problems. https://tele-sport.ru/olympic/tokyo2020/olimpiada-2020-konnyi-sport-muzh/zhen-kvalifikatsiya-1?fbclid=IwAR0Im-rBlwWZitQ7BpGgYQy3K_vZ60Gk9SpdMB3hx2_5avG8skrP2-J2BAg

With the cross-country course at Sea Forest Park (SFP) / Sea Forest Centre now open for walking, the eventing competition which starts with Dressage on Friday and Saturday and cross-country on Sunday means that I’m now very much glued to the live climate data!

Thank you for all the positive comments on my social pages about the diary posts, I’ll keep snapping away!